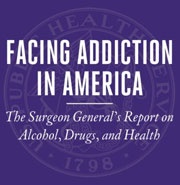 Individuals do not always collaborate with healthcare providers. For example, only about 50 percent of patients with chronic diseases take their medications as prescribed. It remains to be seen whether the population of the United States will collaborate with HHS’s current initiative to protect the well-being of the Nation.

In November 2016, HHS released FACING ADDICTION IN AMERICA: The Surgeon General’s Report on Alcohol, Drugs, and Health. Reports from the Surgeon General are not routine government publications. They address serious threats to the health of the population (e.g., HIV/AIDS) to raise awareness, provide scientific background, and generate interventions to reduce the danger. The reduction in American adults who smoke from 42 percent in 1960 to 18 percent in 2012 is due in part to a series of Surgeon General’s reports on smoking and health that began in 1964.

FACING ADDICTION IN AMERICA conveys authoritative information in accessible language and lists abundant references for readers who desire more detail. The report presents persuasive statistics for anyone who may doubt that alcohol and drugs put our health at risk. For example, “In 2015, 66.7 million people in the United States reported binge drinking in the past month and 27.1 million people were current users of illicit drugs or misused prescription drugs.” (p 1-1) And, “Substance misuse and substance use disorders… [cost] more than $400 billion annually in crime, health, and lost productivity.” (p 1-2)

Scientific background in this report encompasses not only a neurobiological explanation of why substance-using behaviors are so difficult to change, but also research that shows which prevention and treatment methods are most likely to succeed. Health services research supports the integration of substance use prevention and treatment with general healthcare services, which is in keeping with Surgeon General Vivek Murthy’s call for “a cultural shift in how we think about addiction…addiction is not a character flaw—it is a chronic illness that we must approach with the same skill and compassion with which we approach heart disease, diabetes, and cancer.” (Preface)

Substance misuse and addiction are complicated issues whose extensive health and economic consequences affect everyone. Reducing this burden requires action by everyone.

Every one of us fits more than one category. Will we collaborate?

Go to  https://addiction.surgeongeneral.gov for the full report.